An Island of Lights in University Park

“Third Time is the Charm.”
“The Right Time and the Right Place.”
“If You Build It They Will Come.”

And why not? The concept of a public art installation, designed by a famed artist utilizing historic street lights as a centerpiece to the revival of a small pocket park called the Hoover-Union Triangle, is just as valid today as it was in 1993, when the project was first proposed, and again in 2000, when the project was revived –– the first time.

It is with extreme sadness and a profound sense of loss that I share with you news of the sudden and unexpected passing of our close friend and neighbor Corinne Pleger over Thanksgiving weekend. Corinne was a past president of WAHA and directed our annual Living History Tour for ten years. She was also a vital and integral participant in many other organizations. Her presence and friendship will be sorely missed. A Memorial Service for Corinne has been scheduled for this coming Saturday, December 10th at 1:00 p.m. It will take place at the Egyptian Theatre followed by a reception at the family's home in West Adams. 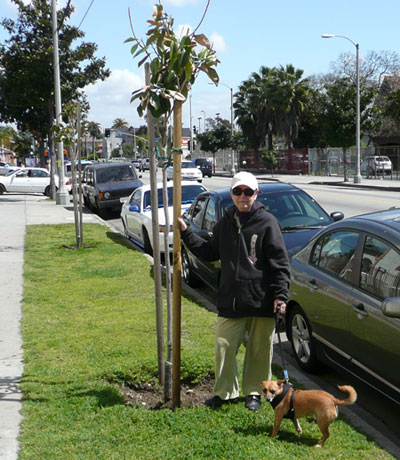 Jennifer Charnofsky with one of the trees WAHA helped plant on Adams Blvd.

West Adams is home to six of the city's twenty-seven Historic Preservation Overlay Zones, a unique treasure of early twentieth century houses. Detracting from the beauty of these lovely old homes, however, are some of the neglected commercial corridors, most notably along Adams Blvd. in the Adams-Normandie HPOZ. In 2009 several WAHA members in local block clubs enlisted Mayor Villaraigosa's Million Tree project to plant 26 trees on Adams Blvd. between Vermont and Normandie Avenues. When fully grown years from now they will provide a leafy canopy that will transform the look of this tired thoroughfare -- and hopefully encourage some historically sensitive development as well.

The trees were free, but local groups had to agree to pay for regular watering and maintenance for the first three years. The trees went into the ground in April 2009. The planting and care is done by the Koreatown Youth and Community Center, a nonprofit that has planted more than 4,000 trees for the city. Block clubs and the local neighborhood council paid for the first year of care. WAHA contributed $400 directly to the second year.

On Saturday, August 14, more than a hundred members and friends of WAHA came together to bring back the Ice Cream Social. It was such a success, that I thought we should share the event with all of you. You may not even realize that WAHA has it's own facebook page, which provides all of us another way to share and stay in contact. If you are on facebook, be sure to add West Adams Heritage to your favorites list.

WAHA is looking for the best exterior paint finishes and gardens in West Adams, to be voted upon at the 4th of July event. Any house painted between June 1, 2009 to May 31, 2010 is eligible. Any garden in West Adams is eligible (newly planted or not). In both cases, the property must be within the Historic West Adams District.

We celebrate another National Preservation month this May with a general membership meeting traditionally and annually hosted by the Historic Preservation Committee. How appropriate that this year we will be in the former Stan’s Kite, an endangered Googie style coffee shop, whose demolition is part of the development proposals for the Washington Square Shopping Center mixed use project. Stan’s Kite, now Vintage Hollywood, is a very special venue. Located in the Washington Square Shopping Center at Washington Boulevard and 10th Avenue, the former Googie Style Stan’s Kite restaurant now houses Leroy Richardson III’s remarkable memorabilia collection of Afro-American celebrity entertainers.

read more...
May Calendar: A busy month ahead...

WAHA offers some wonderful opportunities in the coming weeks!

Saturday, May 15th, Book Signing Event in Lafayette Square. WAHA invites you to meet TV producer Barney Rosenzweig and tour a literary legend’s former home at one of our periodic "Books in Historic Places" events.

This May's General Membership meeting will be a Sunday brunch, on May 23rd and will be in the groove for National Historic Preservation Month. The traditional mimosa brunch gig is down at Vintage Hollywood in the Washington Square Shopping Center on Washington Blvd. at 10th Avenue. Preservation BEAT, a cool celebration of history and land use set in a Googie coffee house, will jam with music and readings. 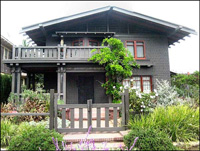 This Old House magazine has just made it official: West Adams is the best neighborhood in California for old house lovers.

In its third annual, state-by-state survey, the popular monthly chose West Adams as the state's top neighborhood "where the historic homes (and life-affirming DIY challenges they bring) are rivaled only by the community spirit that surrounds them."

Our annual Living History Tour at the historic Angelus Rosedale Cemetery took place this year on September 26. Every year, WAHA selects different individuals buried at the cemetery to portray. 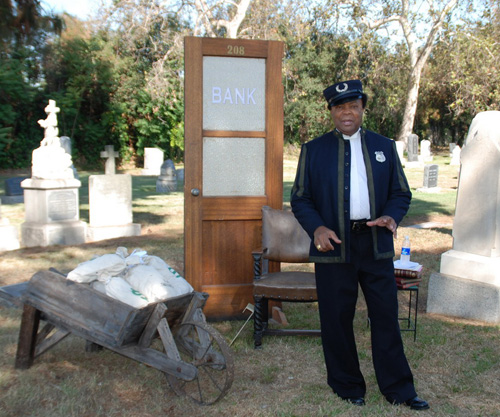