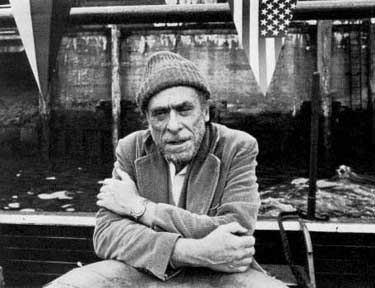 1920-1994. Charles Bukowski was born in Andernach, Germany. His mother, Katharina Fett, was a local seamstress. His father, Henry Charles Bukowski, was an American serviceman who stayed on after the end of World War I. Their son was christened Heinrich Karl Bukowski, a Germanization of his father's name. When the German economy collapsed in the postwar years the family moved to Los Angeles in the spring of 1923. For some time they lived in a house on Virginia Road in the Jefferson Park section of West Adams. The young Bukowski Americanized his name to Henry Charles, like his father. He attended Virginia Road Elementary School. Starting when he was in elementary school his father began to beat him and sometimes Katharina as well.

A few years later they moved to 2122 S. Longwood, just north of Adams Blvd. between Crenshaw and La Brea, where Bukowski's parents remained for the rest of their lives. The young Bukowski adopted the nickname "Hank," by which he was always known to his friends. He attended Mt. Vernon Junior High and Los Angeles High School. In his early teens Bukowski developed acne so severe that he required hospitalization. He missed the whole first semester of high school undergoing medical treatments that left his face heavily scarred and contributed to his shyness with women until he reached middle age. When he graduated high school he attended Los Angeles City College for a year but did not complete a degree.

Hoping to become a professional writer, Bukowski in his late teens and early twenties sent off numerous short stories to literary magazines. After a long series of rejections, at twenty-four he succeeded in getting his first story published, "Aftermath of a Lengthy Rejection Slip," in "Story Magazine." Unwilling to use his father's name, he signed his stories just Charles Bukowski and that became his published identity. Another dry spell followed. Two years later, another short story, "20 Tanks From Kasseldown," was published.

Discouraged, Bukowski spent the next ten years drinking heavily, traveling from city to city around the United States, living for a time in Atlanta, New Orleans, El Paso, and San Francisco. He stayed in cheap rooming houses and worked factory and warehouse jobs, usually in locations where he could sneak out to a bar on his lunch break.

Back in Los Angeles in the early 1950s, Bukowski took a temporary job as a letter carrier for the post office. In 1955 he was hospitalized with a bleeding ulcer that was nearly fatal. When he left the hospital, he began to write poetry -- and resumed drinking.

He returned to the L.A. post office as a mail sorter, and stayed on that job for a dozen years. He began to publish collections of his poetry with small presses. This became more serious when he was approached by John and Barbara Martin in 1965, who were founding the Black Sparrow Press and wanted to publish high quality editions of Bukowski's poetry. Bukowski also began to build a reputation in Los Angeles when he was tapped to write a column in the "Open City" alternative weekly newspaper. After two years, when "Open City" folded, he transferred the column, under the title "Notes of a Dirty Old Man," to the "L.A. Free Press," where it ran for years - and attracted many women, some from as far away as Europe, who sought him out to find out if he knew what he was talking about. One of them was Frances Elizabeth Dean, known as FrancEyE, who bore him a daughter, Marina, in 1964.

In 1969, threatened with dismissal for absenteeism, Bukowski quit his post office job to pursue a literary career, on the promise of a regular $100 a month stipend from John Martin's Black Sparrow Press. The poet Harold Norse, who befriended Bukowski in those years, described him as "a big hunch-back with ravaged, pockmarked face, nicotine-stained teeth, and pain-filled green eyes. . . . A beer gut sagged over his belt."

Less than one month after leaving the postal service he finished his first novel, titled "Post Office," published in 1971 and generally regarded as his best work. It has been described as a masterful chronicle of repetitive work.

Charles Bukowski's style was spare, modeled on Hemingway, and his work was heavily autobiographical, each novel and story virtually a roman a clef with slight name changes. He described sex openly and crudely and was often highly disparaging of his friends and lovers in his literary work, frequently hurting their feelings or ending with them breaking off relations with him. He is often conflated with the Beat Generation writers, but he did not care much for their work and felt little in common with them except for being an outsider.

Bukowski began to develop a wide audience by the mid-1970s, and oddly, he sold even better in Germany than he did in the United States. He made numerous poetry reading tours in both countries, his trademark being to walk out onto the stage with a six-pack of beer, and drink it all during the reading.

In 1976 Bukowski met Linda Lee Beighle, a health food store owner. Two years later the couple moved from the East Hollywood area around Sunset and Western, where Bukowski lived for most of his life, to the port town of San Pedro, at the Southern tip of Los Angeles. Bukowski and Beighle were married in 1985 when he was sixty-five.

One critic has described Bukowski's fiction as a "detailed depiction of a certain taboo male fantasy: the uninhibited bachelor, slobby, anti-social, and utterly free." A documentary movie about his life, "Bukowski: Born Into This," was released in 2004. A full-length biography is "Charles Bukowski: Locked in the Arms of a Crazy Life" by Harold Sounes.