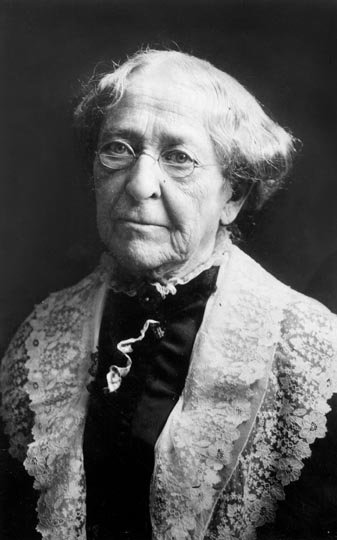 1820-1914. Born Caroline Seymour in Canandaigua , New York . She graduated at fifteen from the Female Seminary at Geneva , New York . In 1840 she married Theodoric C. Severance, a banker. She had five children, the first of which died when he was six weeks old. She was active in abolitionist causes in the years before the Civil War. After the war, in 1866, she helped Susan B. Anthony found the Equal Rights Association.

The next year she joined with Lucratia Mott and Thomas Wentworth Higginson to found the Free Religious Association, which aimed to promote liberty of religious thought, increase humanitarian action and respect for reason, and to encourage a scientific study of theology. From her home in Boston she was active in organizations ranging from the Boston Anti-Slavery Society to the Boston Women's Hospital. She was instrumental in founding the New England Women's Club in 1868 and was its president until 1871. She and her husband moved to Los Angeles in 1875, eventually moving to West Adams where they owned a house called El Nido on West Adams Blvd. She founded the Los Angeles Women's Club, dedicated to improving the lives of homeless children, resulting in the establishment of the Orphan's Home Society in 1883. She later helped to found the Friday Morning Club, a women's club that was at the center of reform efforts in the city. She helped develop the Los Angeles Philharmonic Orchestra, began a city public library system, worked to found a local branch of the University of California (UCLA), promoted historic preservation, crusaded for woman's suffrage, and championed world peace. In 1911, at the age of 91, for her efforts on behalf of suffrage, [we had included the following error in our sketch (see the correction below)]: she became the first woman to register to vote in California .

Hello
I have recently published a biography of Caroline Severance and have noticed that there is an error in your website biography of her. It is the oft-repeated error that she was the first woman to register to vote in California. She was not, and I have corrected this information in my biography.

Perhaps you would like to edit your page to remove this error. She was one of only two women who were leaders of the suffrage movement before the Civil War who lived to vote for U.S. president
but she registered to vote on October 19, 1911 and the first woman to register did so on October 12.

Here is a link to Amazon for Ms. Elwood-Akers' biography.