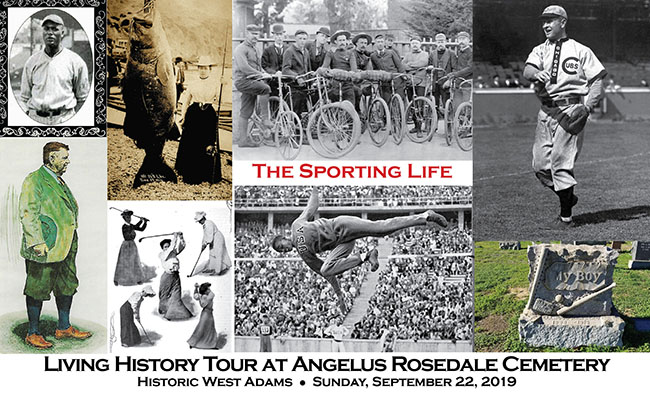 The Sporting Life: Champions and Trailblazers

They were champions and enthusiasts…pioneers of sports in Southern California and trailblazers who helped break color lines. Now their stories will come alive, as actors at graveside in the historic Angelus Rosedale Cemetery give first-person portrayals of some of the sportsmen – and women – who are buried there.

At this year’s Living History Tour, “The Sporting Life: Champions and Trailblazers,” hear first-hand accounts of the 1932 Olympics in Los Angeles, and the 1936 Olympics in Nazi Germany, where high jumper Cornelius Johnson won a gold medal. Meet the “Father of Southern California Golf,” Edward Tufts. Learn why cycling in the 1890s was all the rage, and how sports fishing was invented.

And, the tour will assemble a veritable field of baseball dreams, including an ace pitcher who played in the Nisei League, an outfielder who played in the Negro Leagues, and the legendary Cubs first baseman and manager Frank Chance, of the famed double-play team of Tinkers to Evers to Chance.

Rosedale Cemetery (now Angelus Rosedale) was founded in 1884, when Los Angeles was a small town and its location at what is now the corner of Washington Boulevard and Normandie Avenue was in the countryside, outside the city limits. It was the first cemetery in Los Angeles open to all races, faiths, and creeds, and it was the first to use a new approach in design called "lawn cemeteries…where nature and art conspire to surround the burial places of the dead with beautiful trees and flowers, natural scenery and works of monumental art.”

Angelus Rosedale Cemetery is also home to generations of Angelenos from every walk of life. Each year, WAHA tells some of their life stories while touring the historic grounds with the cemetery’s elaborately-carved monuments.  In this way, the Living History Tour helps educate the citizens of Los Angeles about our history, and the community’s cultural heritage.

Please read this before purchasing your tickets.

Tours will depart approximately every 20 minutes, beginning at 9 a.m. (Advance paid reservations are required; each tour group's participants are pre-assigned. This tour usually sells out. A limited number of tickets may be available on the day of the tour, space available basis.)

(A limited number of tickets may be available on the day of the tour, $40. But please check availability on this website on September 19.)

When you purchase your ticket, please indicate which general time slot you prefer. There are several guided tours departing within each slot and one will be assigned to you in mid-September. We also would like to know who is in your party. We will confirm your purchase by e-mail but you may ALSO write us at tours @ westadamsheritage.org to tell us your preferences, your friends’ names and any other important information. If you are trying to join friends who have previously purchased tickets for Early Morning Tours, please e-mail tours@westadamsheritage.org and we will try to accommodate your request.