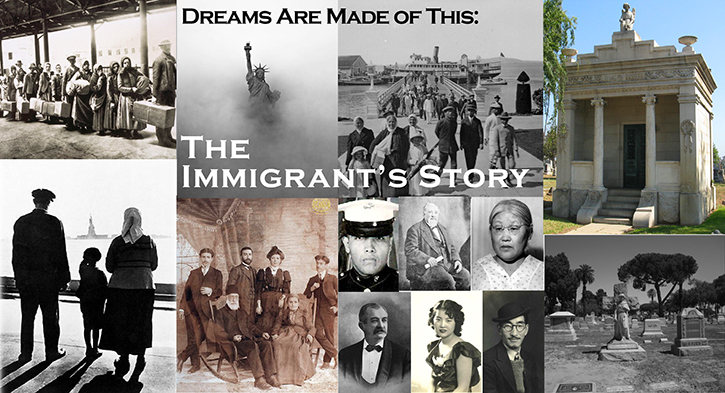 Dreams Are Made of This: The Immigrant’s Story

We are a nation of immigrants…we are a city of immigrants…and Angelus Rosedale Cemetery is the final resting place for thousands of immigrants who settled in Los Angeles from the 1830s through to the present day.

They came to America to follow their dreams…for opportunities and, often, to escape persecution.  And now their stories will come alive at the landmark Angelus Rosedale Cemetery during the Annual Living History Tour. With the cemetery as the stage, actors, in costume and at graveside with set vignettes, will give first-person portrayals of some of the immigrants who are buried there. We’ll learn about their families, their successes and hardships, their hopes and dreams, and their contributions in business endeavors, to the city’s cultural heritage, and on the nation’s battlefields.

“Almost every American has their own American story about how and why their ancestors left their homeland, their motivations to leave the world they knew, as well as their family, friends, and culture. In addition, it is important to understand the sacrifices that were made to come to America and what motivated them to make these sacrifices.” So wrote Valerie Chew Geier, descendent of Henry Fook Chew (one of this year’s portrayals) and author of a Chew family history. “We are all an indirect product of our ancestor’s decisions and lives, and I hope that this glimpse into the past may help to provide insights into yourself, your descendants, or perhaps your future.”

Tour visitors will “meet” immigrants from all walks of life, and from around the world, including:

Henry Fook Chew was one of the lucky immigrants. He arrived from China at age 15 and was taken under the wing of a California official, Reginald del Valle. Although Chew was sent to del Valle’s home to be a houseboy, del Valle instead sent him to school. But Chew’s education was halted later, when he hoped to study architecture but instead was forced into a different (ultimately successful) path of small business ownership.

Jean-Louis Sainsevain was born in Béguey, France, a village near Bordeaux. He came to Los Angeles in 1855 to join his brother, Pierre, and that same year, his uncle Jean-Louis Vignes sold the vineyard El Aliso to the Sainsevain brothers for $40,000, the largest sum of money ever paid for real estate in California at the time. Jean-Louis and his sons went on to own another vineyard/winery in Cucamonga and other related businesses. French immigrants like Sainsevain helped build the wine industry in California, which in his era became the largest in the world.

Actor and restaurateur Willie Fung was born in Canton and immigrated to San Francisco as a young man, joining his uncle in a peanut business. He was discovered by Hollywood in 1922, appearing in the movie Hurricane's Gal.  Unfortunately, Fung is best known as a purveyor of stereotyped performances as foolish Chinese characters (houseboys and waiters) in some 125 movies until his death in 1945. But Fung was more respected among his peers than among (later) film critics and historians. He advocated for fairer treatment of actors by the studios, supported the fledgling Actors Fund in the 1930s, and in 1942 he participated in the Hollywood Victory Committee supporting America’s war efforts. In the late 1930s and early 1940s, Fung also owned an East Hollywood eatery and night club, the New Moon Café, serving up music and “real” Chinese food. Among the regulars was the actor Paul Muni. The writer Henry Miller visited, too, then wrote about Fung: “Willie Fung is fond of music, any kind of music.  When he smiled, a very broad smile, it was like the sun setting over Waikiki.”

In 1910, Korea was annexed by the Empire of Japan after years of war, intimidation and political machinations; the country would be considered a part of Japan until 1945. During the occupation, Japan imposed forced worship of Japanese religion, and took over Korea’s labor along with its land.  The Paik family escaped Korea in 1905, when the Japanese Imperial troops first arrived. Its matriarch, Kuang Do Song, initially supported the family by cooking meals for other farm laborers as the Paiks moved from  farm to farm on the U.S. Mainland before settling in Los Angeles.

The Rev. Dr. Samuel Haroutune Halladjian was born in Aintab, Turkey, Aintab, a beautiful town with dusty cobblestoned streets lined with small shops and large houses with red clay roof tiles. He was the son of an Armenian pastor, Harutyan Halladjian, and had three siblings: Mary, Jacob (a self-proclaimed "artiste" who emigrated to Massachusetts to attend Yale in circa 1905), and Mihran (like Jacob, a photographer.) The Halladjian family bears witness to the Armenian genocide, when some 1.5 million Armenians perished. Mary, Jacob and Samuel all made it to America, and in fact Jacob played a seminal role in Armenian immigration to the United States, as the named Plaintiff in the 1909 federal court case, In Re Halladjian, when Armenians were ruled eligible for U.S. citizenship. But brother Mihran and Samuel’s parents never got that chance. They died during the period that Aintab’s Armenian families were forced across the desert to Aleppo, Syria.

Immigrants have served in the ranks of the U.S. military in every major conflict, starting with the American Revolution. During World War I, around 500,000 immigrants served in the military—approximately 18 percent of all soldiers. After the war, 192,000 immigrant veterans were awarded citizenship. After the United States entered World War II Congress acted to provide for the expedited naturalization of noncitizens serving honorably in the U.S. Armed Forces. Over 100,000 noncitizens that served in the armed forces during that period would receive naturalization for their service. During the Korean War, 31,000 foreign-born soldiers would become naturalized citizens. But some never returned from war. In recent decades, serving this country has still been viewed as a path to citizenship. But some immigrant families, such as the mother and brother of Luis Alberto Figueroa, make an unmeasurable sacrifice. He was killed in the battle of Falluja in Iraq on November 18, 2004, while he was conducting a house-to-house search for insurgents.

Rosedale Cemetery (now Angelus Rosedale) was founded in 1884, when Los Angeles was a small town and its location at what is now the corner of Washington Boulevard and Normandie Avenue was in the countryside, outside the city limits. It was the first cemetery in Los Angeles open to all races, faiths, and creeds, and it was the first to use a new approach in design called "lawn cemeteries…where nature and art conspire to surround the burial places of the dead with beautiful trees and flowers, natural scenery and works of monumental art.”  Angelus Rosedale Cemetery is also to generations of Angelenos from every walk of life. Each year, WAHA tells some of their life stories while touring the historic grounds with the cemetery’s elaborately-carved monuments.  In this way, the Living History Tour helps educate the citizens of Los Angeles about our history, and the community’s cultural heritage.

Please e-mail tours@westadamsheritage.org to let us know you are coming!