Skip to main content
Highways or Communities: What is Our Future?

Highways or Communities: What is Our Future? 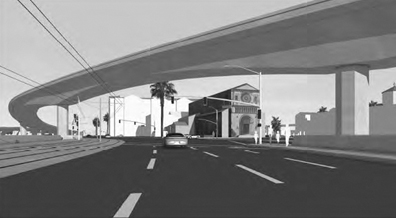 “We build highways.”  And apparently at the expense of communities.

That’s what a Caltrans staffer told us when we questioned why the agency was even considering erecting a massive 54-foot-tall concrete structure (the I-110 HOV Flyover) that will tower over West Adams Boulevard landmarks like St. John’s and St. Vincent’s Cathedrals, and split yet another community in half.

WAHA is in the community-building business, and of course the historic preservation business, and that’s why we urge everyone to attend the hearing on Tuesday, February 23 (6-8 p.m.), at the Orthopedic Institute for Children, 403 West Adams Blvd.  This is your chance to stand with stakeholders, Councilmember Curren Price, and Senator Feinstein’s field staff and give voice to your concerns.

Caltrans is now claiming that this Flyover transit-way, which basically will spend $40 million in taxpayer dollars to move traffic two blocks south and saving commuters – maybe – a couple of minutes’ transit time, will not have a significant impact on our West Adams environment. (Which contradicts their own October 2015 Finding of Adverse Effect.)

This 54-foot concrete edifice would hover over our neighborhood yet Caltrans says it will have:

Caltrans is proposing approval of an “MND,” which stands for “Mitigated Negative Declaration,” which is considered a much lower level of environmental analysis than a full Environmental Impact Report (“EIR”). An EIR requires a full exploration of alternatives; an MND does not. WAHA, along with the Los Angeles Conservancy, St. John’s Cathedral and other community stakeholders, supports nothing less than an EIR – and, frankly, we and the others oppose the project, period.

(You can read the entire MND here. )

In response, the Los Angeles Conservancy has written: “The I-110 Flyover would create a new physical barrier between St. John’s Cathedral and the surrounding neighborhood…degrading the overall character of the community.” And St. John’s Fathers and Rectors wrote, “The proposed flyover project seeks to discount our vibrant and historic neighborhood by cutting through it once again.”

Please…Please do come to the hearing. When Caltrans is proud that it “builds highways, not communities,” we all might find a new Caltrans project in our own backyards, with just as little respect for our individual neighborhoods as is on display right now in University Park.