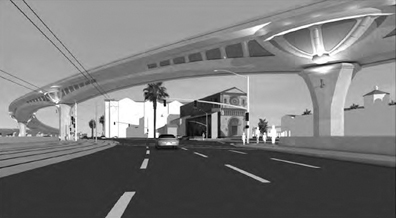 What happens when historic preservation goals clash with transportation objectives? WAHA and St. John’s Cathedral co-sponsored an informational meeting in December, bringing officials from The California Department of Transportation (Caltrans) and METRO together with community representatives and preservation advocates to learn more about Caltrans’ plans to erect a “Flyover” ramp that would stand perilously close to numerous historic resources and housing units, and above the Expo Light Rail line.

read more...
A West Adams Heights Diamond in the Rough

Posted March 18, 2014
Sometimes a nondescript exterior hides a marvelous treasure inside. WAHA has quietly been working with West Adams Heights/Sugar Hill neighbors to save one such gem, a true diamond in the rough: the John L. Matheson/Church of Latter Day Saints (LDS) California Mission Residence, designed by famed architect Fredrick Roehrig in 1909.
Located at 2067 Hobart in West Adams Heights, the house (pictured above left) was brought to everyone’s attention last year when it was advertised for sale as a teardown in favor of apartment units, and an estate sale offered not only belongings but also such house parts as the windows and light fixtures. The realtors to this date have yet to disclose to potential buyers that the property is located within the Harvard Heights HPOZ.

Two Historic West Adams homes are now in the hands of a court-appointed receiver.

Neighbors in West Adams Heights had noticed repeated police visits to the two “Agape” homes on the 2200 block of South Hobart in recent months, so it was not a complete surprise to hear that Los Angeles City Attorney Mike Feuer had filed a civil enforcement action against the owners of the pair of unlicensed assisted living facilities for allegedly jeopardizing the safety and health of physically and mentally disabled occupants.

Feuer sought, and the court appointed, the receiver to immediately relocate these individuals to appropriate living quarters. In addition, the City Attorney asked that the two houses, located at 2205 and 2217-19 South Hobart, be declared a public nuisance and be “abated,” which gives the receiver the power to make repairs to bring the buildings up to code.

As WAHA begins a new calendar year, the forecast for 2014 appears to be challenging yet exciting as WAHA strives to fulfill its continuing mission of preserving the community’s architectural and cultural heritage. On the horizon in West Adams is a year with major new Community Plan initiatives, additional nominations for Los Angeles Historic Cultural Monuments (HCMs), reviews within our Historic Preservation Overlay Zones (HPOZs) to identify historic resources overlooked in some of our older HPOZ surveys, and, of course, advocacy when our historic resources are threatened.

One of West Adams’ most visible landmarks has been gutted without permits and is pending an approval for conversion into multiple apartments – so many apartments that the owner/developer simply cannot build them without making major alterations to the historic exterior as well as completely demolishing all the character-defining interior features.

West Adams preservation advocates enjoyed a very brief holiday break (very brief) before being back hard at work advocating to save historic resources throughout the Historic West Adams District. While WAHA makes every effort to designate resources, and avoid potential conflicts, there are times that require an emergency response. Currently WAHA is working to save the historic William T. Bishop Residence (see story, above) while also reviewing and responding to the draft West Adams-Baldwin Hills-Leimert New Community Plan, and evaluating the initial SurveyLA results for the West Adams District (see story, below).

In addition, WAHA is actively working on numerous other preservation advocacy efforts:

Literally dozens of new (pocket) historic districts and individual potential landmarks in West Adams have been identified recently by SurveyLA, including many historic resources WAHA has known about for years -- and some that are surprises to us as well.

SurveyLA -- the Los Angeles Historic Resources Survey -- is Los Angeles’ first-ever comprehensive program to identify significant historic resources throughout our city. After a few test runs, the first phase of SurveyLA was launched several years ago with the goal of documenting Los Angeles’s previously unknown/unrecognized – at least, by city officials! – historic resources. Since then, SurveyLA teams have combed through the Community Plan areas of South Los Angeles, Southeast Los Angeles and West Adams- Baldwin Hills-Leimert – in other words, much of Historic West Adams – along with other parts of the city.

The City’s Office of Historic Resources (OHR) has announced that Los Angeles has reached a major Preservation Milestone: Historic-Cultural Monument No. 1000 has been designated. The following article is reprinted from the OHR newsletter:

On June 1, 2011, the City of Los Angeles reached a significant milestone in its historic preservation program: the approval of City Historic-Cultural Monument No. 1000, the Golden State Mutual Life Insurance building at 1999 West Adams Boulevard in West Adams.

The Golden State Mutual Building is a very fitting recipient of this honor. Built in 1949, this six-story commercial building was designed in the Late Moderne style by architect Paul R. Williams (1894-1980). Williams was the first certified African American architect west of the Mississippi River, the first African American member of the American Institute of Architects, and also served on the first Los Angeles Planning Commission in 1920.

WAHA recently commented on a Draft Environmental Impact Report (DEIR) for  Washington Square , a mixed-use project proposed for a nearly 8-acre site at Washington Boulevard and  10th Avenue . As a historic preservation advocacy organization, WAHA routinely responds to land-use initiatives, particularly when projects such as Washington Square appear to be out of character with their surroundings and/or threaten historic resources.