Heights of Elegance - A Tour of West Adams Heights

The Heights of Elegance Tour Was A Great Success!

It was a beautiful June day in West Adams Heights, and a beautiful day for West Adams Heritage, when well over 600 people toured four historic residences plus the Greater Page Temple Church of God in Christ (originally the West Adams Heights Methodist Episcopal Church, designed by architect John C. Austin) on Saturday, June 6, raising more than $14,000 for historic preservation.

Highlights included a visit to the Rindge Mansion by Rindge family members who had never seen their ancestral home. WAHA’s Preservation Committee wants to thank everyone –– from the participating property owners to the nearly 90 volunteers to the hundreds and hundreds of tour visitors –– for their support of historic preservation efforts in West Adams.

In its heyday, more than a century ago, West Adams Heights was famed as one of L.A.’s wealthiest enclaves, with elegant mansions built high atop a hill, with views to Downtown, the mountains and the sea. Five decades later, West Adams Heights achieved national renown, as the community where racial divides were struck down by the U.S. Supreme Court, in response to lawsuits headlined by well-known actresses Hattie McDaniel and Louise Beavers, among others. 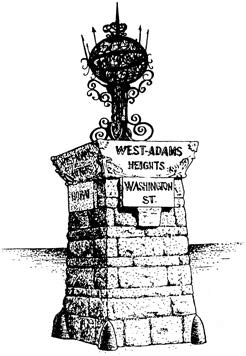 Now, for the first time, WAHA will open the doors to several of West Adams Heights’ grand mansions, most never before opened to the public, and all serving as reminders of Los Angeles’ many layers of history.

West Adams Heights was developed at the turn of the century and was favored by many noted and wealthy Angelenos of the time for its picturesque location on a hill, which afforded views of downtown, the ocean, and scenic landscape vistas. Renowned architects were employed to design imposing homes.

Tour highlights include the Rindge “Castle,” built by the family that once owned Malibu and designed by Frederick L. Roehrig (known as “the Millionaire’s Architect”), and the Charles I.D. Moore Residence, designed by the firm of Hudson & Munsell, architects of the Natural History Museum in Exposition Park.

Tour goers will also visit the home of Hattie McDaniel, who in 1940 became the first black actress to receive an Academy Award, for her performance in “Gone With the Wind.” Along with McDaniel, by the 1940s many important African-American performers (including Louise Beavers, Ethel Waters, and Joel Fluellen) made their home in West Adams Heights, and it came to be known as “Sugar Hill.”

This is a self-guided tour, with the properties clustered within easy strolling distance of each other. Please, no high heels.

Tickets purchased on the day of the tour are $35 per person.

In order to provide sufficient time for checking in guests with advance ticket purchases, Day of Event Tickets will be available to purchase at Check-In location, 2263 S. Harvard Blvd., Los Angeles, 90018,  only from 11:00 a.m. until 1:00 p.m.  Checks and cash are preferred.

Doors will close promptly at 4 p.m., so visitors are encouraged to start as early as possible in order to see and enjoy all the tour properties.